A trip to Ushiku Daibutsu, the world's 'tallest statue'

Autumn is a good time to visit the Ushiku Daibutsu located in the city of Ushiku in Ibaraki, just north of Tokyo. (The photos below were taken in late summer.) The Daibutsu (literally “Big Buddha”) is a giant bronze statue that stands guard over the Jodo Teien Garden and the Jyoen Memorial Park inside the Ushiku Arcadia complex. 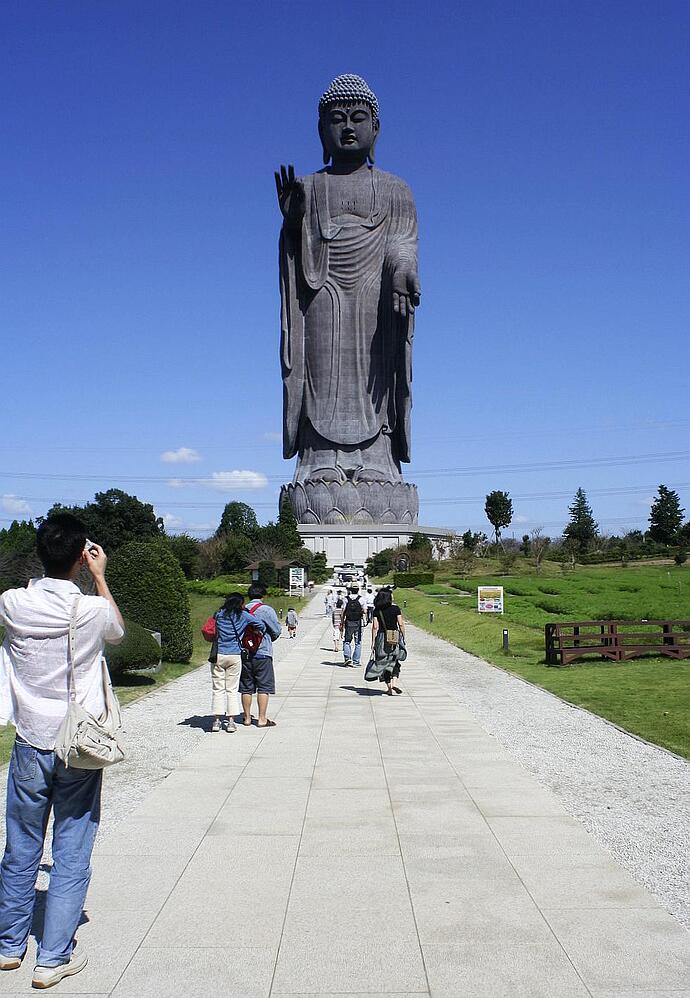 As befitting the Daibutsu’s gigantic size, a huge, 3008x2000-pixel, wallpaper-sized version of this image is available for download here. 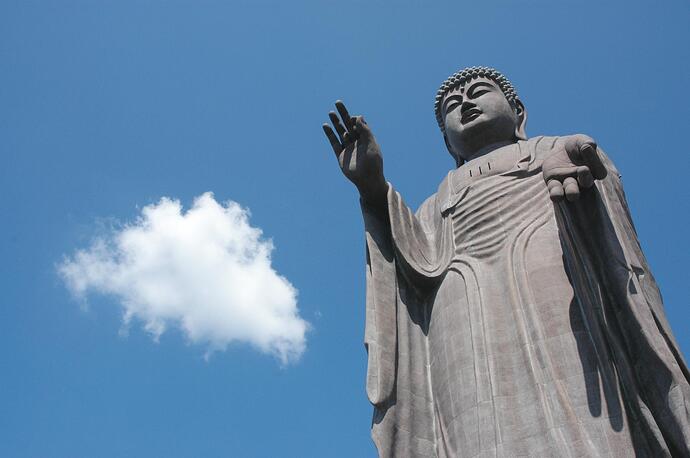 The statue dwarfs structures and people at its base. An elevator inside takes visitors up the statue with views of the surrounding Ibaraki area.

Kamikaze Girls and the Ushiku Daibutsu

The Ushiku Daibutsu figures prominently in the popular film Kamikaze Girls (the film is called Shimotsuma Monogatari in Japan). In the opening flashforward scene the film’s main character Momoko is seen blazing through the rice fields of Shimotsuma on a scooter with the Ushiku Daibutsu in the background and getting hit with a small truck full of cabbage. Airborne, she says, “Farewell, useless Father. Farewell, Grandmother. Farewell, Buddha of Ushiku…”

The fight scene near the end of the movie between Ichigo, Momoko’s yankee friend, and an all-girls gang is also staged with the back of the Ushiku Daibutsu in the background. (This is an entertaining film by the way, with scenes of rural Japan, away from the usual places in Tokyo like Akihabara and Shinjuku.)

Last year, I went to the Ushiku Daibutsu with a friend who came to visit Japan. He had seen the movie and enjoyed the imposing view of the Daibutsu but was disappointed to learn that it is actually nowhere near Shimotsuma as depicted in the film. A city, Tsukuba, separates Ushiku from Shimotsuma.

Is the Ushiku Daibutsu really the world’s tallest statue?

The “Tallest Statue” appellation is not mine, but the Guinness Book of Records’. Inside the Daibutsu is the original plaque that says:

The tallest statue is a bronze statue of Buddha, 120 meters high, in Ushiku City, Japan, structurally designed and built by Kawada Industries, Inc. and completed in 1993.

Below you can see the sheer size of the Ushiku Daibutsu compared to the Statue of Liberty and the Nara Daibutsu.

1,000 pieces of the smaller head will fit inside the real head of the Ushiku Daibutsu.

Interestingly, the Ushiku Daibutsu is only third on Wikipedia’s List of statues by height. The Spring Temple Buddha in China and the Laykyun Setkyar in Myanmar are listed as first and second, respectively, although the Myamarese statue also claims the title.

English-written information about the Spring Temple Buddha in China is sparse and its available photos (1, 2, 3) exhibit confusingly inconsistent images of its base and surrounding area while the Laykyun Setkyar is also portrayed in available photos (1, 2) in various stages of completion. The Ushiku Daibutsu appears the only one to have certification from a third party (the Guinness Book). (Please post in the comments if you have detailed information about the other two statues.)

How to get there

Below is the Google Map if you’re going by car:

Ibaraki: Japan's Most Boring Prefecture™
18-meter Gundam to be built in Tokyo, will defend metropolis from giant lizard attacks
reon Closed December 5, 2022, 4:12am #2