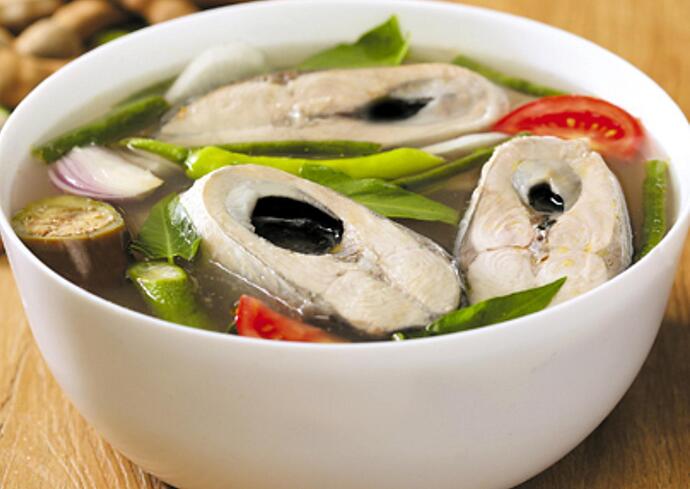 milkfish-sinigang-with-kangkong1800×1277 142 KB
Sinigang with milkfish, kangkong, and other vegetables (Wikipedia)

An interesting essay by Jocelyn O. Celero about a simple Philippine dish and its role in Japanese-Filipino family bonding.

"Blurring the Japanese and Filipino boundaries, sinigang transforms from being a strongly Filipino ethnic dish to a simple comfort food that is shared in a Japanese-Filipino dining table."

Just reading through this article makes my mouth long for milkfish sinigang.

Japanese-Filipino families emerged in the 1970s as historically significant outcomes of Filipino women’s migration to Japan, and Japanese men’s mobility to and marriage in the Philippines. These unions have produced second generation (born and raised in either Japan or the Philippines) and 1.5 generation Japanese-Filipinos (born in the Philippines and partly raised in Japan, or vice-versa) whose acculturation and socialisation are tied to Japanese and Filipino societies. These socio-cultural processes can be understood through food, more specifically through a dish called sinigang.

Sinigang is a traditional Filipino dish originally made of meat (e.g. pork) or seafood (e.g. fish, shrimp), and locally-grown vegetables (e.g. kangkong or water spinach, eggplant, okra, radish), simmered in a soup and made from a sour fruit abundantly produced in different parts of the Philippines. Tamarind, a tropical fruit, is regarded as the most popular sour ingredient. Filipinos claim ownership of this dish which predates 16th-century Spanish colonisation. The ingredients and ways of preparing sinigang have evolved and diversified across time and space. This piece will consider how sinigang has played a role in the transnationality and interculturality of Japanese-Filipino families.

Twenty-five-year-old Tomo (not his real name) travelled from Japan to Manila between the 1960s and late 1970s to visit his Japanese friends working for Toyota Motors. In the 1960s, he recalled, most Japanese travellers carried images of the Philippines as an unpopular tourist destination, and quite unsafe for Japanese since anti-Japanese sentiments from World War II were still strong. He would stay frequently at the Manila Hotel which is near the Japanese Embassy and visit a few places around Manila with his Japanese friends.

His one unforgettable dining adventure was sampling sinigang na bangus (milkfish sinigang). He asked for the recipe from the serving waiter and sought the aid of a Filipino employee at the Japanese embassy in Manila in translating the recipe into Japanese. ‘I had to memorise that talong is nasu, rabanos is daikon…’ He also bought a cookbook and a rolled plastic bag of dried tamarind fruit pulp which he packed into his luggage. His acts depict how Japanese tourists acted as transmitters of Filipino food items to Japan during this time.

This gustatory experience made Tomo decide to set up a restaurant upon returning to Tokyo. In 1963, he opened a sixteen-square-metre small restaurant opposite the NHK building in Harajuku with a starting capital of 100,000 yen. He took the risk of calling it ‘Filipino restaurant’ to attract Filipinos who were the most numerous Southeast Asian migrants in Japan back then, although Filipino cuisine was barely known in Tokyo.

In the 1970s, to address the deepening economic deficit and unemployment levels, the Philippine government promoted inbound mobility of Japanese as tourists, as well as the outbound migration of thousands of Filipinos to Japan as temporary migrant workers. The Philippine-Japan mobility relations benefitted Tomo and his restaurant: he could travel with greater ease to the Philippines to buy ingredients for his sinigang and other dishes, and he could attract more Filipino diners than usual.

Tomo was driven by what Tulasi Srinavas would term his ‘affiliative desire,’ of wanting to accept and be accepted by Filipino migrants through his sinigang. Thus, he worked hard on concocting the right degree of acidity acceptable to Filipino taste buds. Whenever he could not travel to Manila, he relied occasionally on some customers-turned-friends who would vacation in the Philippines to bring him mainly dried tamarind that they could sneak into their luggage, taking advantage of the lenient custom checks at the time.

When he once ran out of tamarind, he experimented with infusing his boiled pork meat, eggplant, okra, and radish with umeboshi (pickled plum) as an alternative souring agent, hoping to marry Japanese and Filipino flavours. ‘They did not like it; it tasted so bad. They ended up ordering beers instead.’ His failed attempt at mediating between Japanese and Filipino preferences indicated the marked ethnocultural dissonance between the local Japanese and the Filipino migrant ‘other’. While sinigang can be versatile, in that the meat and vegetables available in Japanese supermarkets may be used, substituting the key ingredient can be problematic. To diversify his business, Tomo would serve coffee and toast in the morning, full rice and viand meals in the afternoon, and beers at night, in order to cater to both Filipino and Japanese passersby. His restaurant/bar gradually became a very popular venue for parties and gatherings among Filipinos, before it finally closed in 1993.

Tomo’s Filipino restaurant precedes the many Filipino restaurants, bars and shops that have been established across Japan since the 2000s, serving traditional dishes such as sinigang. Since instant tamarind powder was introduced to the Philippine market by Knorr in 1999, the dish has become more accessible and easier to reproduce in Japanese and foreign kitchens. By 2009, according to the Philippine Embassy in Tokyo, there were about 60 Filipino shops and restaurants nationwide, often co-owned by married Japanese and Filipinos. Bowls of sinigang are also often served during bunkasai (cultural festivals) and Philippine Fiestas in Japan.

In 1994, Tomo moved to Manila to retire at the age of 59. The 1990s was the peak of Japanese-Filipino marriages, in which many private marriage agencies were paid to assist Japanese (men) in finding a Filipino spouse. Tomo married Dina, his Filipino wife, in 1994. Yuri, their daughter, was born in 1995. He did not adjust much to the lifestyle in the country, especially to the Filipino food because his ‘stomach has loved it first even before his wife was born’. Negotiating his Japanese identity in the home was evident in how he preferred Japanese to Philippine rice and miso shiru (miso soup) as staples in their family meals, while letting Dina (and their child) decide on the main dishes. Serving sinigang na bangus was always an exception. As a complete and unifying dish, it is cooked according to every household’s preferred mix of ingredients, and the level of sourness is tempered to accommodate the differing tastes of family members. Blurring the Japanese and Filipino boundaries, sinigang transforms from being a strongly Filipino ethnic dish to a simple comfort food that is shared in a Japanese-Filipino dining table. It symbolises Tomo’s established affinity with Filipino migrants in Japan and is a source of intimacy with his newly formed multicultural or ‘mixed’ family in the Philippines.

Tomo’s narrative of ‘affiliative desire’ shows that the willingness of Japanese men to learn aspects of the Filipino culture has an impact on Japanese-Filipino marital and familial relations, enabling them to positively accommodate multicultural or ‘mixed’ identities. Japanese men and Filipino women can be agents of cultural change in Japan and transnational exchanges with the Philippines, where their embodied food experience and migration may help nurture affective relations. Preparing and consuming food that bears cultural meanings such as sinigang can reshape Japanese food experiences, and strengthen cultural understandings vital to the well-being of intercultural families.

Jocelyn O. Celero is currently Assistant Professor and Coordinator of the Japan Studies Program at the Asian Center, University of the Philippines-Diliman. She obtained her PhD in International Studies at Waseda University, Tokyo, Japan in 2016.

This essay was originally published in Routed Magazine under a Creative Commons license.