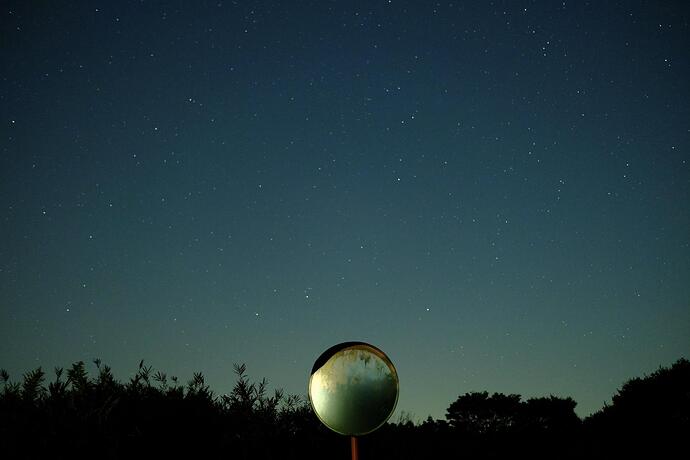 When I was new to the country, one thing I noticed was the ubiquitous traffic mirrors on the streets in Japan. After having lived here for a few decades, the thing I find remarkable is that I haven’t really seen a single broken one.

Where I come from (the Philippines), shiny objects like these out on the streets tend to attract projectiles like corpse flowers attract flies. That these mirrors last for years and years without damage just goes to show that the Japanese have a good sense of community and take care of public installations for the common good.

Traffic mirrors are a common sight throughout Japan–rural and urban–where many streets are narrow and corners are sharp: here is one in rural Chino City in Nagano Prefecture, a place nestled between the mountains of Central Alps. 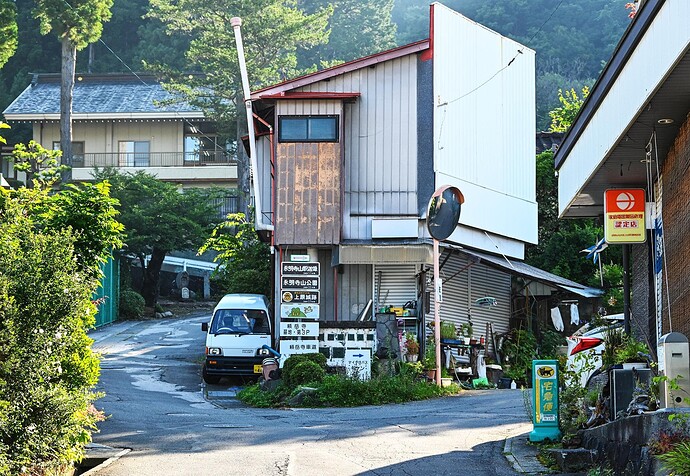 There are traffic mirrors on streets of Nara Prefecture, like these in Yamatotakada City, reflecting both left and right views of the street. 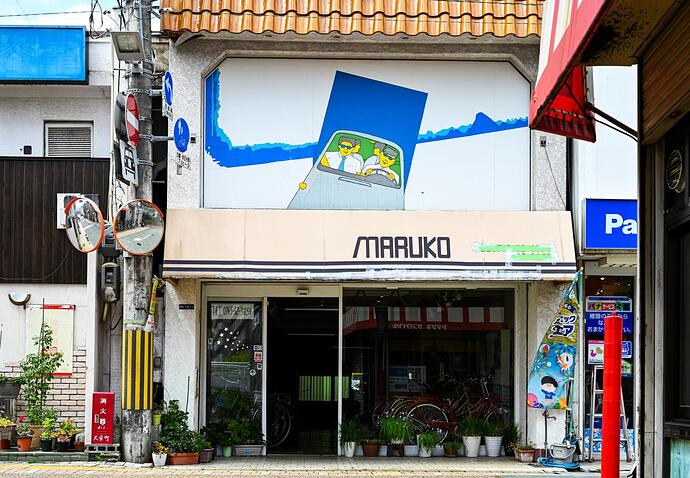 Even in the snowy recesses of Toyama Prefecture, where 1.5 meters of snowfall is not uncommon, traffic mirrors are convenient reminders to check where you’re heading, lest you accidentally drive where you’re not supposed to.

The sign below the mirror says “Caution” (注意 chūi). 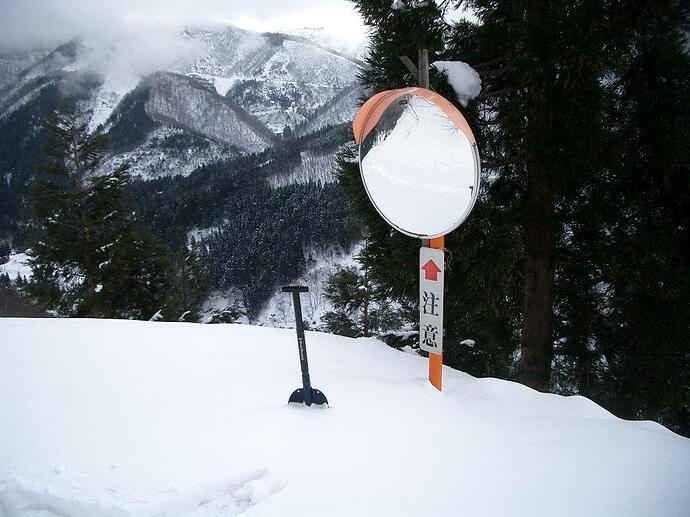 In Japan, these mirrors are commonly called kābu mirā (カーブミラー) which I mistakenly assumed to mean “curb mirror” but which actually stands for “curved mirror.” Another one of those “Japanese-made English,” like konsento for a power outlet.

Most mirrors are orange-framed circles. Not this one in Yokohama. It’s rectangular and gray, like the asphalt and concrete that make up most of this photo. 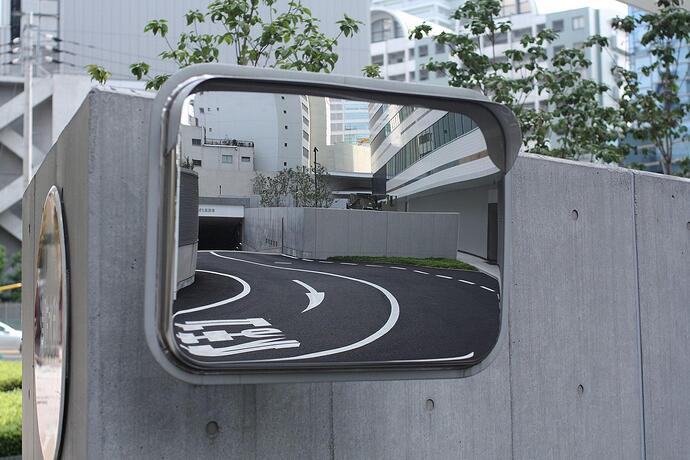 In this early-morning photo also taken in Yokohama, you can just see the photographer inside the mirror–standing behind another mirror, while the lady coming around the corner wears an expression of benevolent amusement. (Original large version)

Old, traditional stores like this that are tucked away along the back streets of towns and cities are fast disappearing, increasingly being replaced by modern, franchised 24-hour stores like Lawson, Family Mart and Seven-Eleven.

The unusual red-and-white pattern on the frame of these mirrors reminds me of the arches of the Great Mosque of Cordoba, an important example of early Islamic architecture. 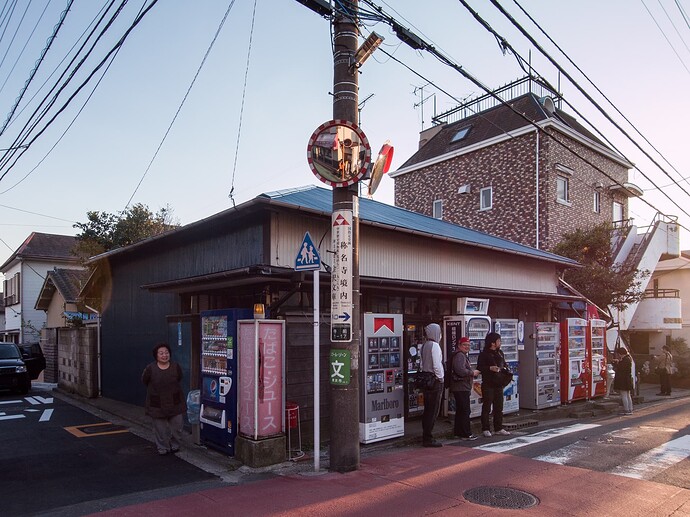 For the motorist in Japan, traffic mirrors are essential street installations for preventing accidents. For the casual photographer and camera-toting tourist, however, they serve other purposes besides safety.

When positioned large enough inside the picture, a traffic mirror is very convenient when taking photos that would otherwise attract the attention of an unsuspecting subject, like this woman taking her dog for a walk along the back streets of Tokyo on a clear April morning–no doubt enjoying the cherry blossoms in full bloom. 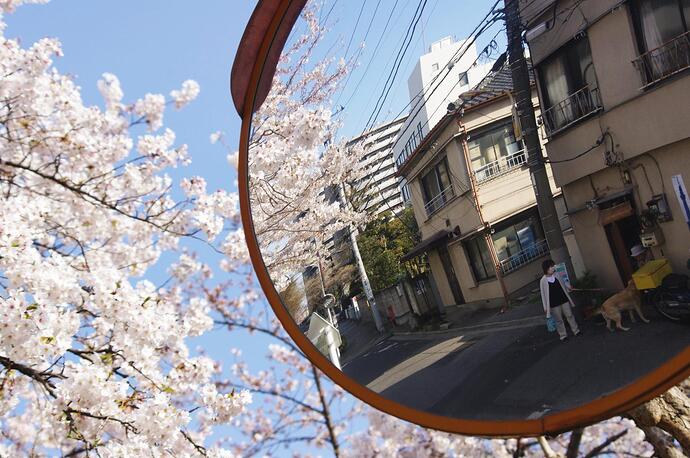 Mirrors bend light, creating a picture-within-a-picture, like this mirror reflecting the mountain in the distance and the narrow street between traditional houses in rural Yasuura Town in Hiroshima Prefecture. 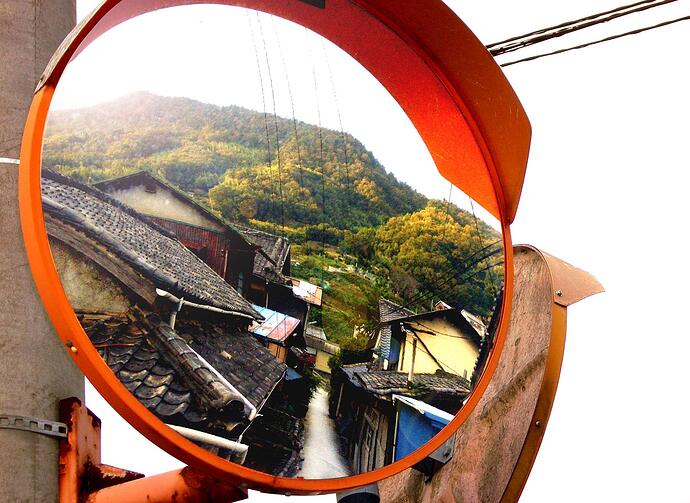 Sometimes the traffic mirror itself is the main subject of the photo, like this orange-framed mirror with its round, shiny orb contrasting neatly with the rough surface of the wooden electric pole beside it, numerous lines of wire coming and going like spokes of a wheel in disarray. 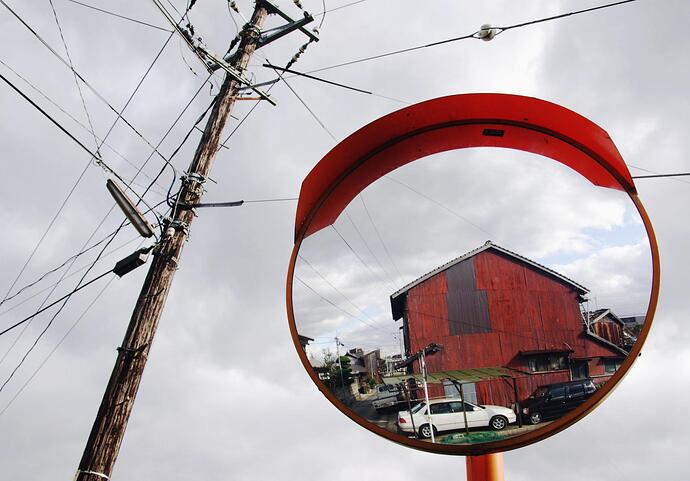 Or this photo taken during twilight, the half-moon floating some 384,400 kilometers away in space against the darkening sky. 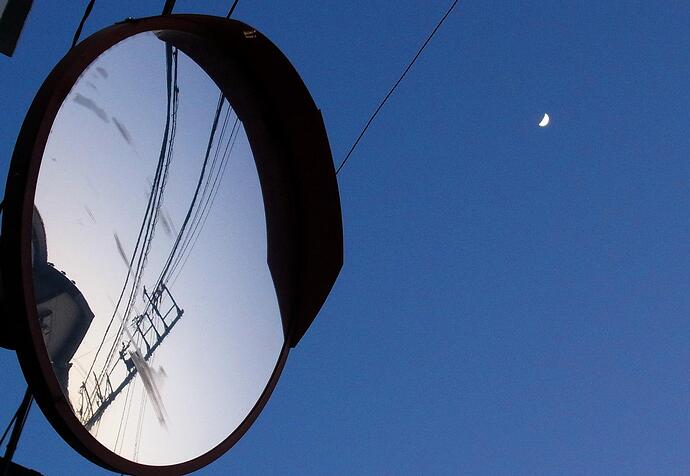 Now, here’s a rare sight. A broken traffic mirror! I never thought I’d see one but here it is. 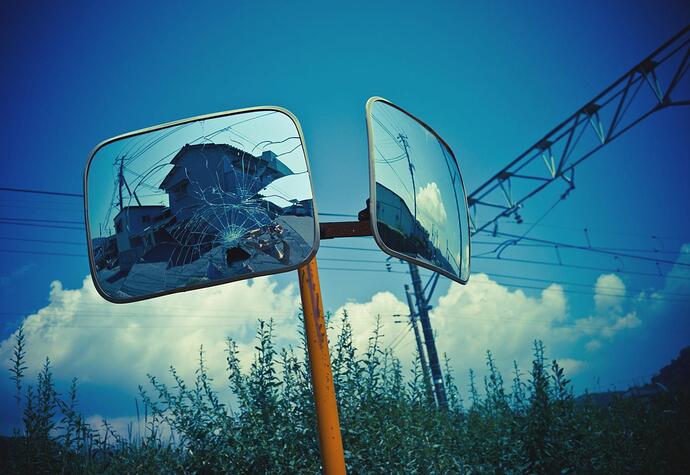 A traffic mirror makes a natural frame, perfect for taking selfies while showing the view in front of you.

I like the photo below–the perfect roundness of the mirror; the way it “punctures a hole” inside the photo to show the photographer; the diminishing sizes of the people inside the mirror. 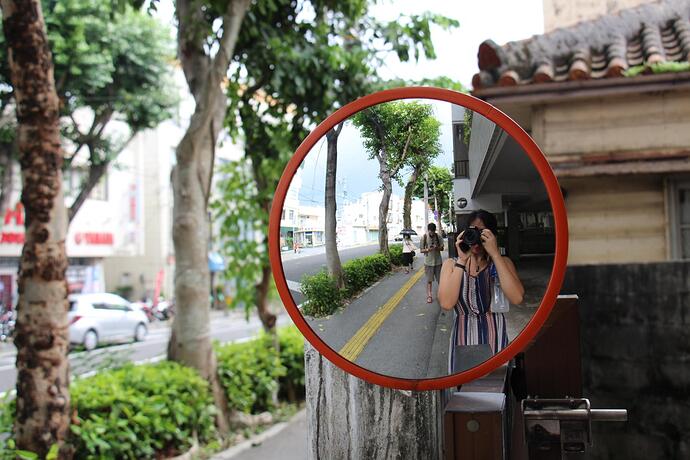 Another rare sight: a mirror lying on its side, as if taken down because it doesn’t serve its purpose anymore. It’s almost surreal the way the mirror shines like a jewel under the shade, while reflecting the bright spring scenery with the bike-rider under the cherry blossoms. 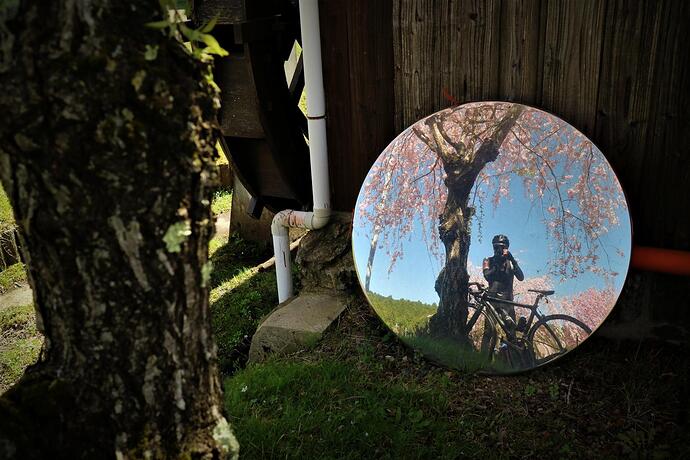 I like to take photos of mirrors myself, this mist-covered one I took one foggy morning in Tsukuba.

I just realized that this is the only mirror in this list that doesn’t reflect anything in its surroundings. Only temporarily, though–in a few hours, the fog will dissipate, the mist will clear and it will be back to its normal reflective self. 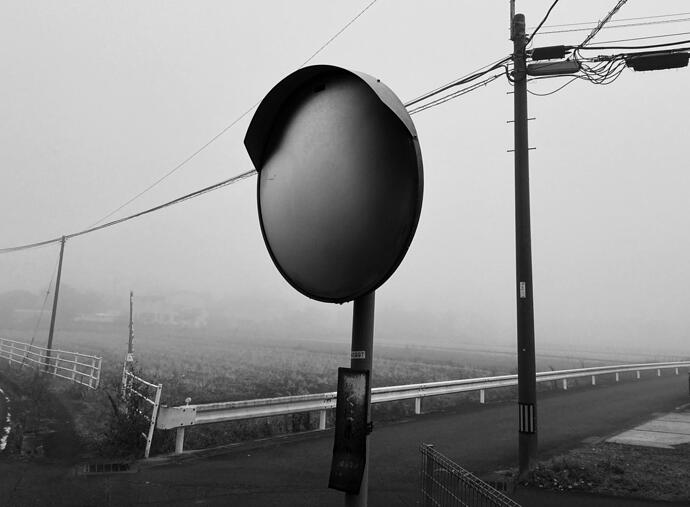 And finally this photo that I took while bicycling one early morning in Tsuchiura, Ibaraki, just in front of a sharp corner facing the concrete side of an overpass.

The sign enjoins the motorist to stop (とまれ) and watch out for children rushing out to the road (子供の飛出しに注意). And while they’re at it, they can check the time, too. 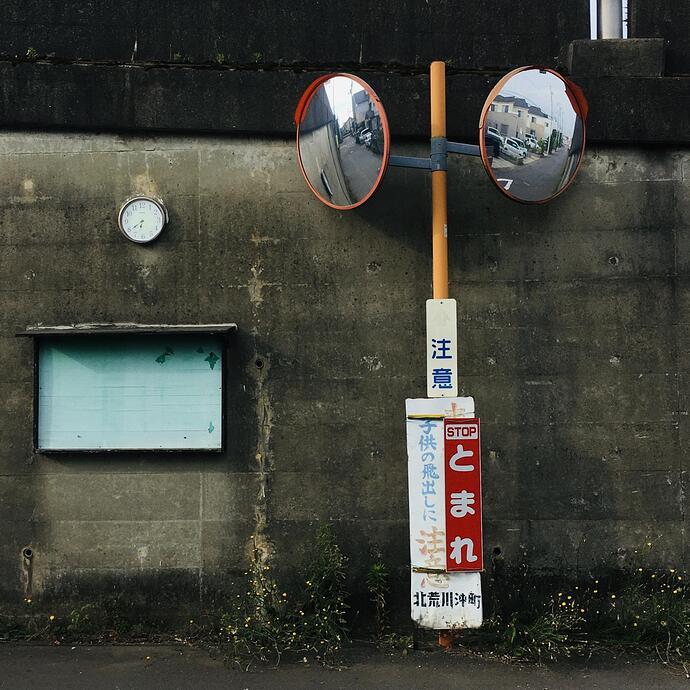 All photos under Creative Commons license.